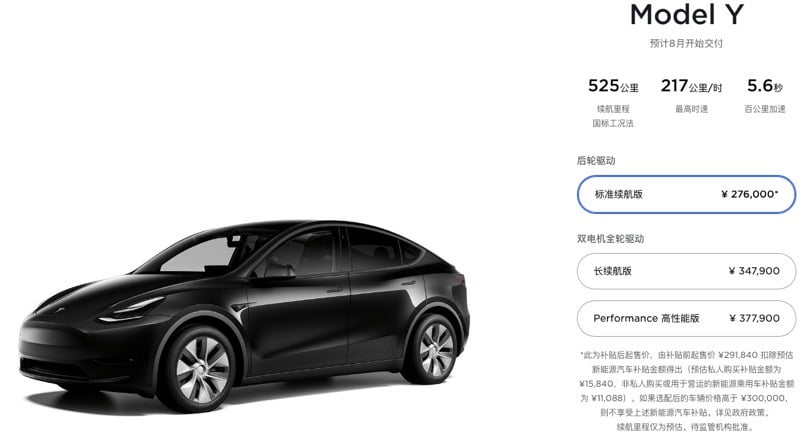 Tesla’s Model Y Standard Range rear-wheel drive (RWD) was short-lived in Canada and the USA, but the entry version of the company’s compact crossover SUV is now making its debut in Mainland China, following a recent release in Hong Kong.

The Environmental Protection Agency (EPA) range estimate for the U.S. Model Y Standard Range was at 244 miles (392 km). The EPA range is typically based on real-world scenarios, including highway testing, while the NEDC range testing is usually based on ideal lab conditions.

With a new more affordable version of the Model Y, the compact crossover SUV looks to increase its demand in China, to help Tesla kick off its Q3. Batteries in the Model Y Standard Range are said to be Lithium iron phosphate (LFP) batteries supplied by CATL, just like the Model 3 in China.

Chinese buyers will need to contemplate paying 25,100 CNY (about $3,900 USD) or 10% more than a Model 3 Standard Range, to buy a Model Y instead, as the prices aren’t that far off from each other. The Model Y offers a larger vehicle and about 12% more range.

The Model Y Standard Range was axed by CEO Elon Musk for markets in Canada and the USA back in February, citing the vehicle did not meet Tesla’s ‘standard of excellence’, given its limited range.