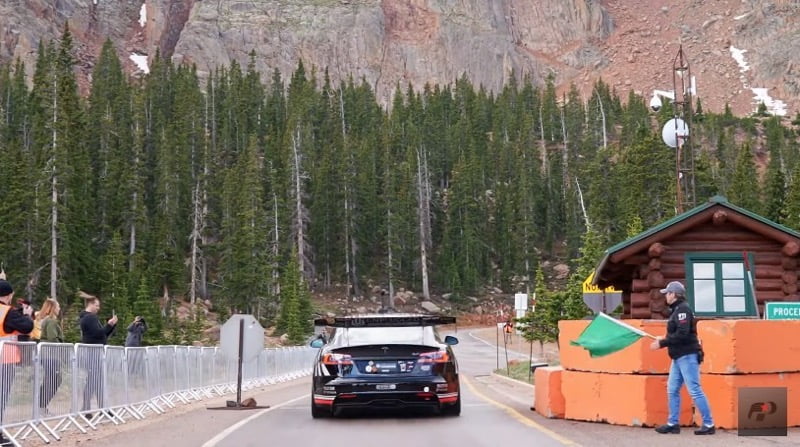 On Day 4, Pobst details how the team tested out Yokohama slicks on wet conditions to get a feel for the car, considering race day could result in unpredictable weather at times. Pobst said he didn’t go full out with the cold tires, but rather was conservative, to get a feel for the grip. He did still go full throttle on the straightaways and said the brakes felt really good.

“Today was wet in the middle section of Pikes Peak practice in the Tesla Model S Plaid, and it handled it like a champ. We got the oversteer fixed as well. It looks like the car is ready for race day and so is Randy,” explains the video’s description.

After the test run was finished Pobst said the car felt great and the previous alignment issue has since been fixed as of Wednesday night. “We can start that race right now!”, concluded Pobst. Officials also noted the Model S Plaid forgot to turn on its audible ‘siren’ to let others know the electric car is racing up the mountain.

You can also check out another video below from Pobst below, talking about the Unplugged Performance partnership with Bilstein:

If you’re planning to finance your next Tesla purchase in the United States, rates have increased to kick off the fourth quarter. As noted by Waiting4Tesla.com (@w4tsla), financing rates for Model S/X and Model 3/Y on the Tesla website in the U.S. have increased 0.25%, now showing as 4.74% (previously 4.49%). Tesla partners with major […]
Sarah Lee-Jones
24 hours ago