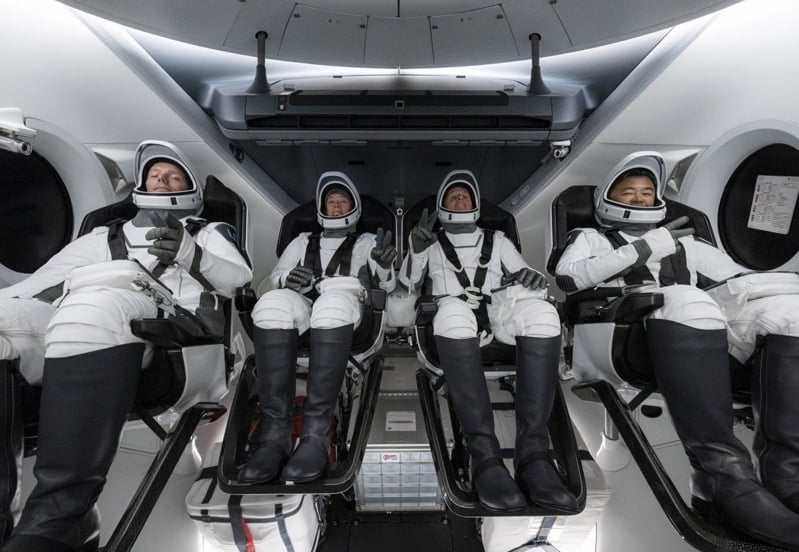 SpaceX’s Falcon 9 booster launched its Dragon capsule with NASA astronauts from the Kennedy Space Center in Cape Canaveral, Florida this morning, taking off at 2:49am PDT/5:49am EDT.

Liftoff of Falcon 9 and Dragon! pic.twitter.com/g6Oi8qwU2Y

After a successful launch and main engine cutoff, stage separation was confirmed and the second stage with Dragon continued its journey to the International Space Station.

The Falcon 9 booster then successfully landed aboard the autonomous droneship, Of Course I Still Love You, and marked SpaceX’s 80th landing of an orbital class rocket booster.

NASA astronauts Shane Kimbrough and Megan McArthur, along with Japan Aerospace Exploration Agency (JAXA) astronaut Akihiko Hoshide, and European Space Agency (ESA) astronaut Thomas Pesquet are now headed to the ISS, with an autonomous docking set for Saturday at about 5:10am EDT.

Onboard Dragon, Crew-2 astronauts already checked in and shared a glimpse of the capsule in real-time. What a time to be alive to see this instantly.

You can watch the ongoing coverage of the Crew-2 Mission live below:

Upon the Crew-2 arrival to the ISS, currently occupied by the SpaceX and NASA Crew-1 mission since October, the latter astronauts will return to Earth following a four-day shift change procedure.