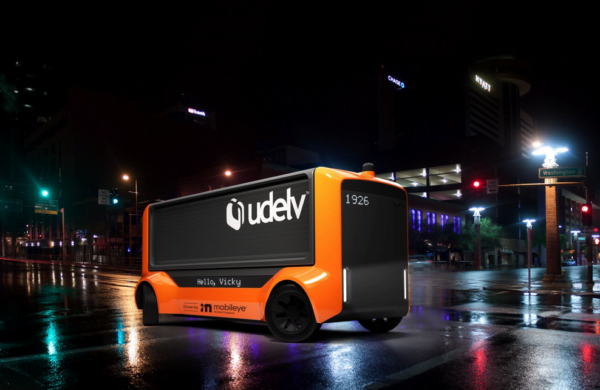 A subsidiary of Intel, Mobileye, has huge plans for the future of autonomous vehicles, and it recently announced a partnership with Udelv to help build the framework for new driverless delivery technology.

On Monday, Mobileye announced its new deal with Udelv to produce over 35,000 driverless delivery vehicles, called Transporters, by 2028, with commercial operations beginning as soon as 2023, according to TechCrunch. The first pre-order of the Udelv Transporters has already been made by US commercial fleet leasing management company Donlen for 1,000 units.

Mobileye CEO Daniel Laury detailed the partnership in an email to the press, with Udelv being an autonomous vehicle delivery startup, and Mobileye providing a framework for the self-driving software and hardware.

Laury said, “This is a hardcore engineering problem to solve when one understands the multiplicity of goods to deliver, the variety of ways to do it, and some other intricately complex issues linked to the automation of last and middle mile deliveries.”

“By partnering with Mobileye, Udelv can focus 100% of its resources and efforts to perfecting the business application while Mobileye provides the tool to scale fast. It is a win-win situation,” added Laury.

The news comes amidst a backdrop of other companies beginning to develop their own electric delivery vehicles, like Amazon which is already testing its Rivian electric vans in San Francisco.

How Tesla is Going to Replace Radar, Detailed In-Depth by Facebook Software Engineer