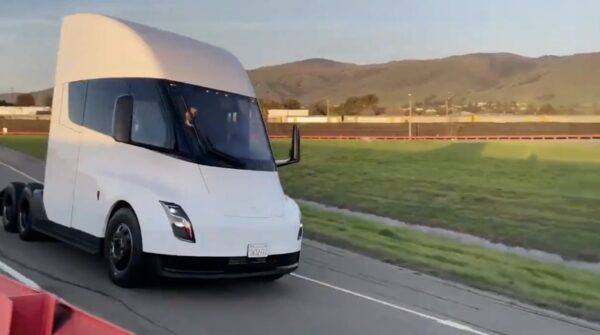 One Canadian company is betting big on Tesla’s Semi truck for the logging industry.

Mosaic Forest Management has announced a partnership with local Vancouver Island, British Columbia-based service provider EcoWest Driven, in order to introduce a number of Tesla Semis to the logging industry, according to Business Examiner (via CHEK News).

EcoWest Driven plans to construct its own charging stations for the trucks, while Mosaic plans to completely electrify its 300-truck logging fleet using Tesla’s electric Semi-truck.

Mosaic Vice President and Chief Forester Domenico Ianndinardo said, “To our knowledge, there’s no one in the world hauling logs with fully electric trucks in the mountainous terrain that we have here, so this would be a global first for fully electrified full log haul trucks.”

While Mosaic already employs a re-planting strategy that is supposed to continually renew its resources, the company’s biggest hindrance to battling climate change is in its trucks’ emissions.

In British Columbia, over 90% of power is already generated from clean hydroelectric sources, and the move to electric trucks will help Mosaic support a goal of achieving carbon neutrality within the province by 2035.

One of the first companies to sign up for EcoWest Driven’s plan was island grocery chain, Quality Foods.

“We’re definitely the first on Vancouver Island to be doing this and we may be the first in Canada,” said Justin Schley, vice-president at Quality Foods, speaking to CHEK. The grocery chain said it would be able to do round trips with Tesla’s Semi to all of its stores without charging.

“We drive over a million miles a year with our fleet and to save that amount of emissions and to reduce that off our roads, especially on Vancouver Island, is ever so important,” added Schley.

Tesla’s first chargers on Vancouver Island were built as recently as 2017, though EcoWest Driven plans to help Mosaic and other businesses go electric – partially through the construction of new electric vehicle (EV) charging stations.

EcoWest plans to build 45 new commercial charging stations at its Angel Road property in Parksville, as well as a service garage which will include six more chargers.