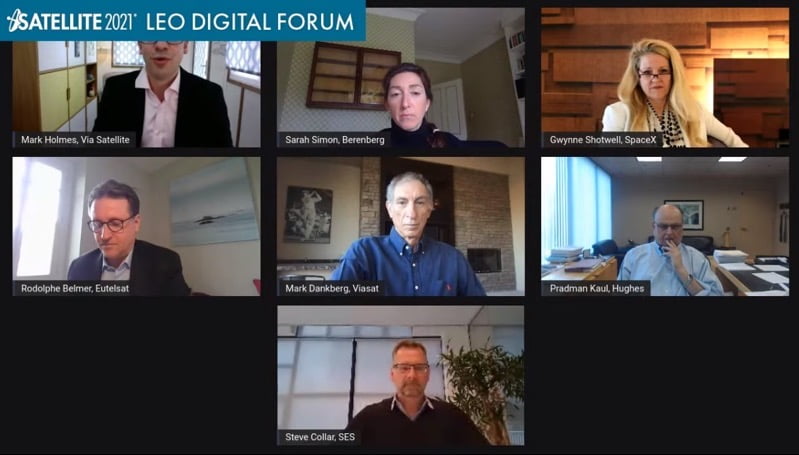 The digital event session was titled, LEO/MEO/GEO: The New World Order, which would include “top influencers from the satellite industry” to discuss the future of satellites.

CNBC space reporter Michael Sheetz covered Shotwell’s comments, and we’ve shared the most prominent ones below.

How Many Starlink Satellites are in Orbit?

For starters, Shotwell says SpaceX now has roughly 1,320 Starlink 1.0 satellites in orbit at the moment. She says SpaceX hopes to have “full connectivity globally” after about 28 Falcon 9 launches. At 60 satellites per launch, that works out to 1,680 satellites.

These first-generation Starlink Satellites aren’t the “laser link” variant, or known as inter-satellite links, but SpaceX hopes to build a “mesh network” with the latter in the long run.

Addressing concerns about space junk and Starlink adding to the problem, Shotwell said “LEO is an incredibly important environment …we have no intention of causing an issue in LEO that would prevent us from launching our other customers, launching crew” to the ISS.

She added the company is “concerned about the number of satellites that are at very high altitude. In fact, we’re bringing our satellites down from our original altitude because the debris” are able to remain in orbit longer.

Shotwell said SpaceX has no timeframe for Starlink to exit its beta phase. “We still have a lot of work to do to make the network reliable…we’ll move off of beta when we have a really great product.”

When it comes to pricing, SpaceX has no plans to move to tiered pricing. “We’re going to try to keep it as simple as possible and transparent as possible, so right now there are no plans to tier for consumers,” she said.

As for the costs of Starlink user terminals, Shotwell says they cost $1,500 US each to make, and a new version just rolled out that’s $200 cheaper, meaning $1,300 USD. In other words, SpaceX is eating the cost of the $499 USD satellite dish and router beta customers are paying. These dishes originally cost $3,000 USD to make.

“We are not charging our customers what it costs us to build those terminals right now. But we do see our terminals coming in the few hundred dollar range within the next year or two,” said Shotwell.

Starlink Coverage in the U.S. and Beyond

The SpaceX COO said “five years from now”, Starlink will be able to provide satellite internet for “every rural household in the United States,” or “roughly 60 million people”.

She also says they are doing a similar analysis for other nations as well, with a focus first in the U.S., due to proximity and the fact Americans speak English. If there are problems with dish hardware, SpaceX can quickly fix the problem by shipping another one out.

Shotwell said, “we definitely want to expand this capability beyond the U.S. and Canada.”

The SpaceX president noted Starlink is a complimentary service to incumbent providers such as AT&T, Comcast and the rest and not meant to replace them. Starlink is focusing on rural areas.

She says the company “were noobs to this business just a few years ago” and figured they’d “struggle a bit more” when it came to designing and building Starlink satellites.

When helped SpaceX was the company’s Dragon spacecraft, as it helped “tremendously” in figuring out satellite architecture for Starlink. But one remaining challenge is scaling Starlink to consumer customers.

Shotwell was also named the Satellite Executive of the Year 2020 by Via Satellite today.

The online forum featuring Shotwell took place one day before SpaceX plans to launch yet another batch of 60 Starlink satellites into space, set for Wednesday, April 7, at 9:34 a.m PDT/12:34 p.m. EDT, from Space Launch Complex 40 in Cape Canaveral, Florida.