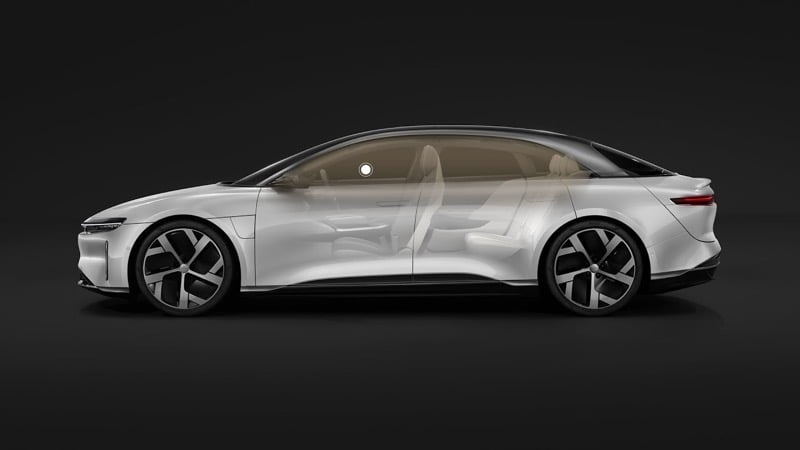 Surreal Sound, according to the company, will showcase 21 speakers and the first car in the world to debut Dolby Atmos technology, which offers spatial audio.

Lucid Motors says the audio system inside the Lucid Air will also have a state-of-the-art DSP architecture and also rear, side and overhead locations for the 21 speakers.

Derek Jenkins, Senior VP of Design, says “The Lucid immersive system is really about this further evolution of dimension and depth. It’s not only about front to rear or left to right. It’s also up and down. That’s what makes it truly unique.”

Lucid partnered up with Dolby Labs to implement Atmos support.

Tim Pryde, Director of Music at Dolby, said “The way that Lucid has approached the automobile very much resonates with Dolby’s approach to experiences. We are creators creating things for other creators. With Atmos we’re giving creatives a whole new way of thinking about audio to where they now just think about audio in space.”

The Lucid Air sound system can handle “hundreds of sounds” at the same time and sounds can be controlled to be immersive.

“For example, if someone in the rear seat is not wearing the seatbelt, the seatbelt chime comes on, but it comes from that back corner. Or when we start up the car – it doesn’t just come to life in front of you. It comes to life all around you,” says Antonis Karalis, Senior Product Manager, Audio Infotainment.

Last week, Lucid Motors CEO Peter Rawlinson took out a release candidate Lucid Air for a test drive in California. Check it out below if you missed it:

Lucid recently delayed its Air launch to the second half of 2021. It remains to be seen if the company can deliver its electric vehicle on time, as promised.