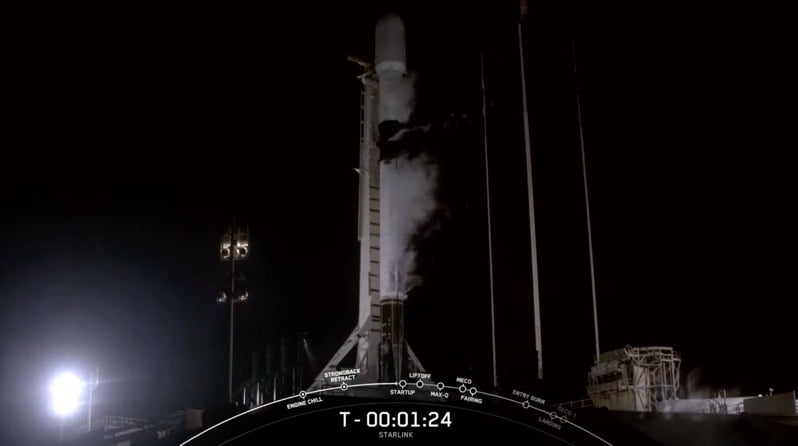 SpaceX was set to launch 60 Starlink Satellites into space on Sunday evening aboard Falcon 9, but the liftoff was scrubbed at t-minus one minute and 24 seconds.

“Auto-abort at T-1:24 ahead of tonight’s Falcon 9 launch of Starlink; next launch opportunity is tomorrow, March 1 at 8:15 p.m. EST,” said SpaceX shortly afterwards.

Auto-abort at T-1:24 ahead of tonight's Falcon 9 launch of Starlink; next launch opportunity is tomorrow, March 1 at 8:15 p.m. EST

According to Andy Tran, SpaceX Production Supervisor hosting the live stream, he said after the launch scrub, teams are usually “overly cautious on the ground”, with the countdown’s purpose to catch any signs of something that could go wrong.

“Vehicle and payload are healthy”, added Tran, noting the next launch would take place tomorrow at 5:15pm PST/8:15pm EST.

The most recent Starlink launch was back on February 15, when Falcon 9 successfully reached space, but failed its landing attempt onto SpaceX’s autonomous drone ship. SpaceX cleared its upcoming Starlink launches afterwards to further test and it’s easy to see why teams were cautious leading into tonight’s launch.

SpaceX is set to provide Starlink internet to Wise County, Virginia through a grant from the Virginia Coalfield Economic Development Authority (VCEDA), as detailed in a report from the Bristol Herald Courier. The grant money will be dedicated to providing the low-Earth orbit satellite internet service to unserved and underserved households with school children in […]
Peter McGuthrie
50 mins ago

Ahead of the Crew-5 Mission launch this week, SpaceX is looking to upgrade a secondary pad at the Cape Canaveral launch site. SpaceX is planning upgrades on another launchpad at Kennedy Space Center to be used as a backup for future cargo and crew missions, as reported by Space News. The news comes as SpaceX […]
Peter McGuthrie
8 hours ago