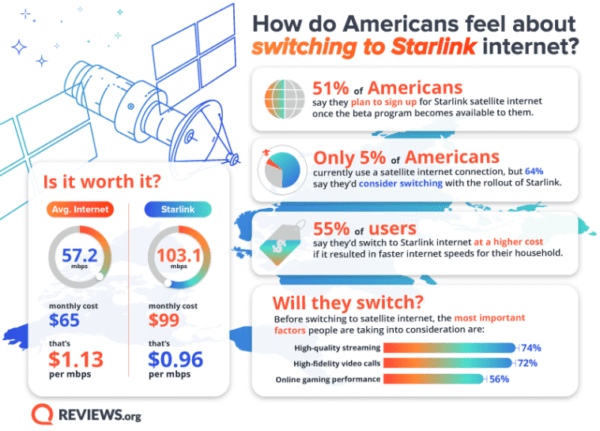 Most United States residents would consider switching to SpaceX’s Starlink internet, according to a new survey. Photo: Reviews.org

It’s safe to say that most United States residents don’t feel great about their internet service provider (ISP). Especially when working from home, ISPs seem to have a lot of power, as some are seeing throttled speeds due to heavy demand on networks.

However, SpaceX’s Starlink presents a whole new option to come, and likely one with better connectivity, affordability, and, frankly, one with cool new technology like low-Earth orbit constellations entirely made up of satellites.

In a recent survey of 500 people over 18 as conducted by Reviews.org, it was discovered that 55% of United States residents surveyed would switch to Starlink today if they were offered faster internet (via PC Mag).

Even with a higher cost per month than the average by about $34 (USD), the users still claim they would sign up for Starlink, and many of them even said they would try switching to the beta, which is already out.

Among the most important needs cited by internet users who were surveyed were streaming (74%), video calls (72%), and online gaming (56%). The sample size of the survey is relatively small compared to the U.S. population, however.

In any case, Starlink is here to stay, and as the first low-Earth orbit satellite internet to arrive of many to come, it’s no surprise that it’s already a hit before it’s even publicly available.

SpaceX is set to provide Starlink internet to Wise County, Virginia through a grant from the Virginia Coalfield Economic Development Authority (VCEDA), as detailed in a report from the Bristol Herald Courier. The grant money will be dedicated to providing the low-Earth orbit satellite internet service to unserved and underserved households with school children in […]
Peter McGuthrie
17 hours ago

Ahead of the Crew-5 Mission launch this week, SpaceX is looking to upgrade a secondary pad at the Cape Canaveral launch site. SpaceX is planning upgrades on another launchpad at Kennedy Space Center to be used as a backup for future cargo and crew missions, as reported by Space News. The news comes as SpaceX […]
Peter McGuthrie
24 hours ago