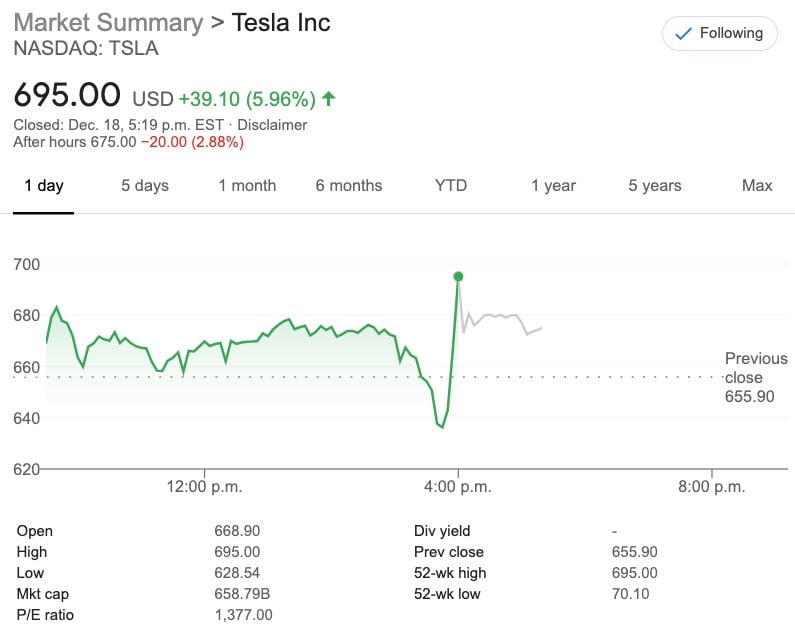 Investors in Tesla saw the company’s stock rally to an all-time high of $695 per share to close out the Friday trading day, ahead of the electric automaker’s inclusion in the S&P 500, set to begin on Monday.

Shares of Tesla dipped below $637 per share at 3:45pm ET, only to rally in its final moments as index traders gobbled up the stock, sending it up 6% for the day.

So far in 2020, Tesla’s stock has had astronomical gains of 731%, whereas the S&P itself is up 15%. Tesla investors are now awaiting Monday’s trading day, the first time Tesla will trade as part of the S&P 500.

Tesla CEO Elon Musk has spoken out in regards to his agreement to buy Twitter on the original terms, after news broke on Tuesday morning. Musk said just now, “Buying Twitter is an accelerant to creating X, the everything app.” When asked if it would be easier to build X from scratch, Musk replied, “Twitter […]
Sarah Lee-Jones
3 hours ago

Tesla announced on Tuesday it has hit a milestone of reaching 10,000 Superchargers in Europe. “Tesla owners in Europe now have access to over 10,000 Superchargers, spread over 30 countries,” said the automaker on LinkedIn. “The European network has already grown more in 2022 than any other year, with still 3 months to go,” said […]
Sarah Lee-Jones
7 hours ago