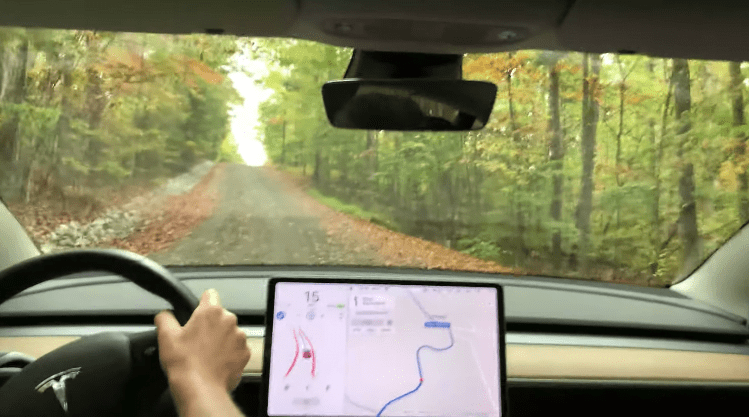 We’ve seen our fair share of Tesla Full Self-Driving beta demos on city streets in California—but what about a hilly, leaf-covered gravel road in North Carolina?

While Zeb has his hands on the steering wheel, he explains, “I have no input other than tapping the accelerator if I feel like it’s going too slow. The car is completely on it’s own otherwise. If I actually moved the steering wheel, the blue circle would turn off, you see that when I get to the end of the road.”

“The entire time the car was moving except for the very beginning and when I was turning it around at the end of the road, the car was driving itself. My hands were only there for safety, so I could instantly correct it should the car make a mistake. I’m going to re-run that road (and a few others like it in the area) with my hands not gripping (but still very close to) the steering wheel on Tuesday,” added Hallock.

“I do not work for Tesla and Tesla did not compensate me for this. I do run a Tesla owner’s club in [North Carolina]”, explains Zeb.

Below is the first FSD beta video shared by Zeb on Sunday, spanning nearing an hour-long, driving in central North Carolina:

Check out the videos above and tell us your thoughts in the comments about how you thought FSD handled the situations thrown at it by Zeb in North Carolina.

Tesla kicked off its 2022 AI Day by showing off a demo of its Optimus robot. The Optimum bot was able to walk out on stage on its own, wave to the crowd and even ‘raise the roof’ to music. Optimus was shown lifting boxes, working in a factory doing some light work and even […]
Sarah Lee-Jones
10 hours ago

Tesla’s big AI Day 2022 is here and it is slated to start at 6:15pm PDT/9:15pm EDT from Palo Alto, California. The event is to recruit engineers to “build the future of AI”. According to the AI Day invite, attendees will “learn about Tesla’s latest developments in artificial intelligence, including Full Self-Driving, Tesla Bot, Dojo […]
Sarah Lee-Jones
19 hours ago

A set of photos shared this week show that Tesla’s Powerwall and Solar Roof are super durable and will continue working after exposure to storms, as noted by one roofing company. @Tesla retweeted photos of a Tesla Solar Roof and Powerwall that withstood winds and rain from Hurricane Ian on Thursday. The photos, originally shared […]
Peter McGuthrie
20 hours ago