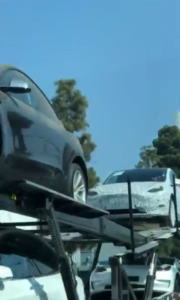 With so many exciting developments in progress, it can be hard to keep up with all the news of Tesla units to come.

Leaving the Tesla Design Studio in California, Twitter user @teslaphotografr spotted what many believe might be a wrapped Euro Model Y test vehicle on Tuesday.

Users on Twitter speculated as to just what this vehicle was – while some thought it may have been a Model X or a Model 3, the vast majority of onlookers believe it to be a modified Model Y for the European market. If so, it’s set to be a seven-seater, and will eventually be built out of Giga Berlin.

Just spotted this being dropped off at Tesla Design Studio. Look at the front 🤩 #tesla #model3 #modely @tesla pic.twitter.com/wauzE7atwp

In the past, the electric vehicle (EV) company has stated it will use structural battery packs with its new 4860 battery in Giga Berlin units of the Model Y, though it is unclear if the wrapped vehicle does, in fact, contain a structural pack.

Others on Twitter wondered whether the car also contained LiDAR sensors, in spite of the fact that Tesla CEO Elon Musk has stated his dislike for the technology in the past.

Auto manufacturers wrap their vehicles in camouflage wrap to hide subtle changes. This Model Y is looks to have a European license plate hiding under the front.

Whatever the mysterious, wrapped car turns out to be, it’s likely some kind of prototype from the EV giants. And if it is a prototype Euro copy of the Model Y, European fans are going to be quite excited to see it unveiled.

Electric vehicles (EVs) are becoming more popular in Europe with each passing quarter, and a new milestone has been reached with one of Tesla’s EVs at the forefront. The Tesla Model Y led Europe’s EV sales year to date through August, with 7,011 units of the electric SUV sold in the month, according to CleanTechnica. […]
Peter McGuthrie
7 hours ago