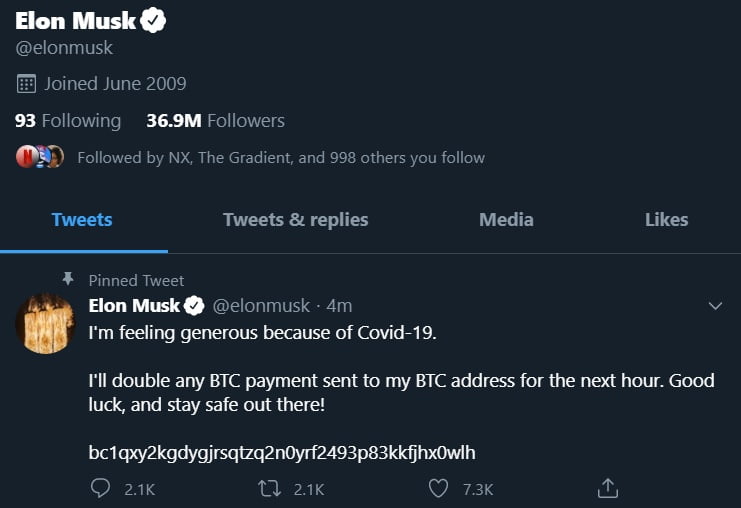 It’s been a field day on Twitter, after high profile verified accounts were hijacked to spread a bitcoin scam. Tesla CEO Elon Musk’s account was one of the compromised accounts, alongside other notables such as Apple, Bill Gates, Uber and Barack Obama.

“I’m feeling generous because of Covid-19,” tweeted Musk’s account after it was hijacked. “I’ll double any BTC [bitcoin] payment sent to my BTC address for the next hour. Good luck and stay safe out there!”, added the Musk tweet.

According to Motherboard, the hack was an inside job, with a Twitter employee being paid to access an internal tool for the hack, claims unnamed sources.

CEO of Twitter, Jack Dorsey, said it was a “Tough day for us at Twitter. We all feel terrible this happened.”

Earlier this evening, Twitter said “Internally, we’ve taken significant steps to limit access to internal systems and tools while our investigation is ongoing. More updates to come as our investigation continues.”

More electric vehicles (EVs) are set to be sold in China this year than throughout the rest of the world combined, according to an exposé from The New York Times on Monday. As many countries struggle to incentivize EV sales using tax credits and subsidies, China’s customer base has already begun to pivot toward the […]
Peter McGuthrie
7 hours ago

A coming software update has added a useful pop-up feature for Tesla’s Superchargers, showing new details that weren’t previously included. Tesla software update 2022.36 includes a newly designed pop-up map feature for Supercharger locations, as detailed by Not a Tesla App on Monday. The pop-up map includes information such as the number of available charging […]
Peter McGuthrie
8 hours ago

Tesla’s official CCS Combo 1 adapters have begun delivering to customers, as noted on Monday by a Model 3 owner (via Reddit). The CCS adapter costs $250 in the U.S. and $325 in Canada, offering up to 250 kW at third-party charging stations where Tesla’s proprietary Supercharger connections aren’t available. Tesla launched official sales of […]
Peter McGuthrie
8 hours ago