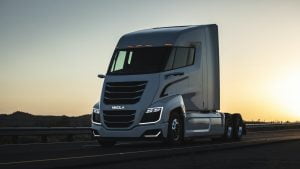 In the world of electric vehicles, Tesla has become a household name. However, with a namesake that’s strikingly similar to Tesla’s, the new electric truck maker Nikola aims to put its name on the map. Nikola plans to release a new electric semi that will reach the market before Tesla’s semi truck. Nevertheless, in a new announcement on Twitter, Nikola has some solid plans for a new factory in Arizona.

Yesterday Nikola CEO Trevor Milton tweeted saying, “Breaking! @nikolamotor factory in Coolidge Arizona breaks ground July 23rd. The ceremony will be held there to kick off construction of the plant that will build up to 35,000 zero emission semi trucks and create thousands of jobs.”

With plans to expand production and build new hydrogen stations, Nikola received some recent favor in the media spotlight. In the early stages of the company, it’s difficult to tell whether Nikola is here to stay. Some speculate that the company merely provides a fun competitive comparison to more established electric vehicle makers like Tesla.

In any case, the company’s recent IPO attracted some attention. Nevertheless, in a new report from Fox Business, “Milton previously acknowledged that Nikola is going public before other companies typically do, as it was formally announced as a company in May 2016, but expressed his confidence in the electric truckmaker during a March interview with FOX Business’ Maria Bartiromo.” The announcement of a new factory in Arizona bodes well for the fledgling manufacturer. They plan to break ground in just over a month, on July 23rd, 2020.