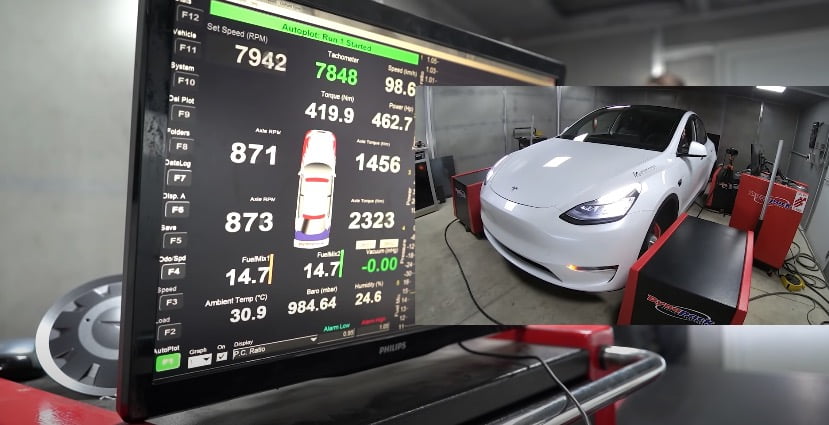 Mountain Pass Performance recently put a Model Y on a dyno, which measures a car’s performance (horsepower and torque figures). The model they tested was the Model Y AWD Performance variant, in which the EV database estimates a power output of 456hp (via InsideEVs).

But, when the Canadian garage based in Toronto, Ontaro, tested the Model Y, it produced a whopping 502hp. That is more than the estimated standard. It’s not the first time the Canadian garage has tested a Tesla. When the Model 3 had its 5% power boost add-on, (which Tesla made in an over-the-air upgrade), that dyno test by Mountain Pass Performance saw 480hp, which is a roughly 30-horsepower increase from before.

“More power than the Model 3 Performance?! Follow the MPP team as we take delivery of a brand new 2020 Tesla Model Y Performance and head straight to the dyno to find out!”, explains MPP’s video description.

Check out the Model Y on the dyno below:

Instead, the only way to find out the factory figures is to privately put them on a dyno. This is where figures can become quite confusing. InsideEVs Italia also put an updated Model 3 to the dyno test recently. Their car ended up producing 472hp which is 8 less than the one in Canada.

Tesla has debuted a 2023 Model Y All-Wheel Drive, in existing inventory for immediate purchase in select states. Currently, Tesla’s website no longer offers the Standard Range for purchase, as only Long Range (delivering Dec 2022 to March 2023) and Performance are available. The Standard Range Model Y AWD was made at Gigafactory Texas with […]
Sarah Lee-Jones
10 hours ago