Tutorial: Using the Steering Wheel in the Tesla Model Y and Button Controls 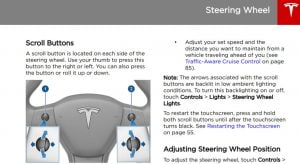 The new Tesla Model Y is full of new features. As such, many drivers are still learning all the ins and outs. In this week’s tutorial, we’ll take a look at the different options and controls available to drivers of the Tesla Model Y. Feel free to follow along with the Tesla Model Y Owner’s Manual.

Scroll buttons on the left and right sides of the steering wheel represent key controls for the vehicle. For example, the left scroll button controls the volume of the speakers and song controls. But the button also controls more important features such as the mirror positions and angle of the headlights.

To adjust the steering wheel position follow these steps, as outlined on page 51 of the Model Y Owner’s Manual.

These are just some of the most important controls to be aware of in regards to the Model Y steering wheel. There are several more features to explore. All of them can be found in the Model Y Owner’s Manual.

Electric vehicles (EVs) are becoming more popular in Europe with each passing quarter, and a new milestone has been reached with one of Tesla’s EVs at the forefront. The Tesla Model Y led Europe’s EV sales year to date through August, with 7,011 units of the electric SUV sold in the month, according to CleanTechnica. […]
Peter McGuthrie
6 hours ago